How Can I Protect My Wealth From Inflation?

Five questions to ask before inflation really takes of. 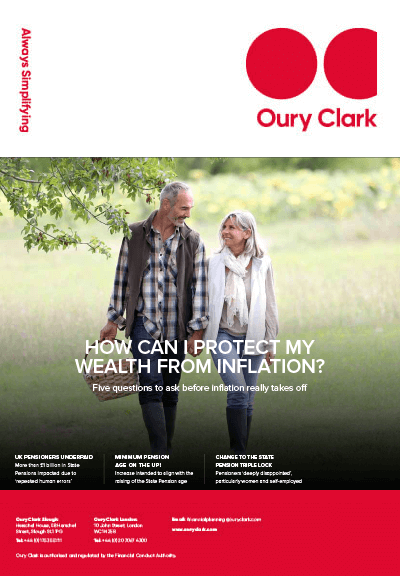 Welcome to our latest edition. This issue was written prior to the Chancellor of the Exchequer, Rishi Sunak, presenting the second UK Budget of 2021 on Wednesday 27 October. We will look at the key announcements included in the Chancellor’s red box in the next issue.

Inside, ‘How can I protect my money from inflation?’ is a question that many people may be asking themselves right now. In the current economic climate, rising inflation is becoming a concern for people with savings and investments. The effect means you’re potentially earning less money due to your hard-earned cash becoming worthless as time goes by. The negative impact of inflation upon the real value of an investor’s portfolio will be a concern, particularly for the older generation with not enough investments, who may live mostly or entirely o! their savings and pensions. On page 06 we consider five questions you should ask yourself before inflation takes o!.

The Department for Work and Pensions (DWP) underpaid 134,000 pensioners in State Pension to the tune of £1 billion, according to the National Audit Once (NAO). Complex State Pension rules, outdated and unautomated IT systems, and a high degree of manual review and understanding required by caseworkers led to the errors uncovered by the investigation. Errors affected pensioners who first claimed their State Pension before April 2016, do not have a full National Insurance record, and who should have received certain increases in their basic State Pension. Read the full article on page 08.

On page 24 we look at one of the less publicised pension changes being planned – the raising of the Normal Minimum Pension Age (NMPA) from 55 to 57. This is to be effective from 2028 and will be included in next year’s Finance Bill. The NMPA is the age that you can usually first access pension benefits without incurring penal tax charges. Pensions tax rules in the UK are some of the most complicated aspects of UK tax legislation – not ideal when pretty much everyone has to interact with them.

The earnings benchmark of the State Pension triple lock will be temporarily set aside for next year. The Department for Work and Pensions (DWP) confirmed on 7 September that the State Pension triple lock rule will not be applied for the 2022/23 financial year over concerns of the potential costs involved. It comes after the Once for Budget Responsibility (OBR) said in July that pensioners could see their payments rise by as much as 8% due to the guarantee. Read the full article on page 05.